Redefining PTSD: The Power of Rehabilitation Through Adventure 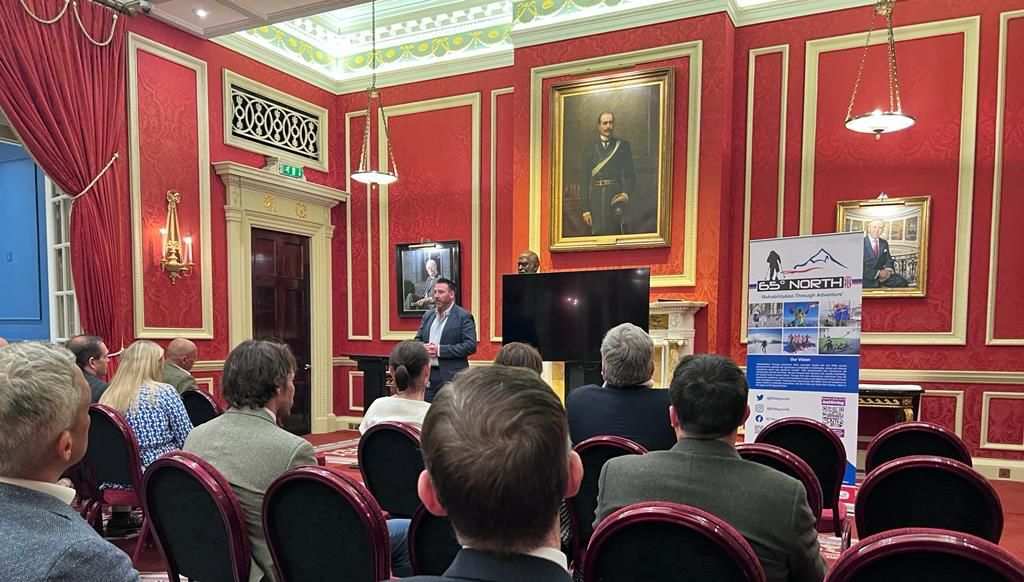 Invited to take part in a recent 65 Degrees North fundraising event in London, Enigma Alliance CEO and sponsor Stuart Page, came away not only deeply inspired by the stories of the three veterans who shared their stories but also inspired by the work that the organisation does for wounded, injured and sick service personnel. “Focusing on rehabilitation through adventure, 65 Degrees North is helping to bring people back to life,” says Stuart. “And washing away the stigma of PTSD.”

The physical scars can remain for a life time – as is the case for Michael Swain MBE, who was in the Rifles and served one tour in Afghanistan. He is now a double-amputee. When he discovered 65 Degrees North, together they decided to set him a tough challenge. He would hand cycle from John O’Groats to Land’s End, the two furthest points of the UK. It took him 89 hours, 55 minutes and 14 seconds.

“What he achieved on the hand bike was nothing short of a miracle,” says Richard Morgan, MBE, CEO and Founder of 65 Degrees North. “No legs. Just hands. I don’t think I’ve ever seen anything like it in my life.”

While the physical scars vary, it’s the mental scars that can take much longer and be the most challenging to heal.  They can also be difficult to spot and diagnose.

Joe Winch, was a Royal Marine for the best part of 20 years. In 2017, he was finally diagnosed with Complex Post Traumatic Stress Disorder. “Joe didn’t know what was happening to him. And there is stigma of course around mental health,” says Stuart, who had the pleasure of listening to Joe at the recent 65 Degrees North fundraising event in London. “After serving many tours in Afghanistan, he became more and more distant from his family and kept climbing mountains by himself. At his annual medical test his doctor told him he had PTSD. But Joe couldn’t believe it, and asked how did he know? Apparently when he was in the hearing booth, he was triggered, and ended up crouching down going through a PTSD episode. Afterwards he had no memory of that.”

Joe explains that even though he’s been in intense psychotherapy for 4 years, it “hasn’t made much of a dent in my symptoms which remain as acute as ever.” Through 65 Degrees North, he found his community. “You realise that you are not alone in this journey,” he says. He reflects on their summit of Everest. “At the summit I thought, what is making this moment so incredible? Of course, I’m on top of the world. But it’s more than that. The adventures, the expeditions are a pretext to something far more important. It allows for hope. And it permeates across everyone [involved].”

Zoe Mack, Lieutenant in Royal Navy, says of her experience: “When I got injured everything fell away. And there was no one. I was just left on my own.” It was a rock climbing experience with 65 Degrees North that began to strengthen her resolve.  ‘It was one of those moments where everyone comes together and say, you said you couldn’t do that. And look at you. You can do it. Pulling my head away from it hurts, you can’t do this, you haven’t been able to walk let alone climb to climbing up a ridge that Royal Marine Commandos used to train on… I had no choice, I had to give this a go.”

“The future is bright, there is a light at the end of the tunnel. And it’s not a train”

Says Stuart, “65 Degrees North shows that there is life after PTSD, that there are tools and methods to overcome it. And you don’t have to be a veteran to suffer from PTSD. You can be a mother overcoming a traumatic childbirth, or as the last few years have shown us, you can be a frontline worker, a nurse, a doctor… But the message is that you can come back from it. In this case, it’s experiences, challenges and community that bring you back.”